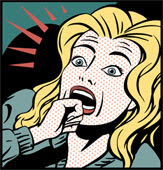 The ad popped up on my Facebook page: “Get screened for lung cancer!”

Usually I ignore fear-mongering solicitations from ruthless medical marketers, but this ad stood out: it was from academic medical powerhouse UCSF. The test it promotes is spiral CT, a powerful X-ray that can be used to painlessly render 3-D images of the lungs.

So what’s the catch? Well, for starters, there is debate about how well it works. There is also the issue of cost.

The answer seems to be yes, for a select group of high risk people screened under carefully controlled circumstances. The data is only six years old and comes primarily from one large randomized controlled trial.

What are the trade-offs?

The radiation from a CT scan causes problems of its own. According to the American College of Radiology, the test delivers approximately the same amount of radiation a person gets from the sun in two years. If everybody had this test it could cause one additional fatal cancer for each thousand people tested.

As with most cancer screening, the risks also include a false positive scan, which can result in a fearful, anxious patient. The imaging may reveal other, unexpected concerns outside the lung.

Either of those results can lead to invasive follow up procedures, such as biopsy — “a significant risk” for patients, said UCLA Radiology Professor Denise Aberle in an interview. Aberle was the principal investigator of the seminal National Lung Screening Trial (NLST) trial, reported in NEJM last year.

Only some insurers cover the scan. The cost of a spiral CT, according to the National Lung Cancer Partnership, “varies but is usually in the range of $300 to $500." Medicare doesn't currently pay for this test, perhaps “because the guidelines are so new.”

Other insurers may be persuaded to change their coverage in late 2013, when the U.S. Preventive Services Task Force (USPSTF) is expected to publish a revised recommendation. It's currently taking a neutral stance, saying there is insufficient evidence to recommend for or against.

The magnitude of the problem creates tremendous pressure for solutions. More than 150,000 Americans die of lung cancer each year, more than from breast, colon, prostate and cervical cancer combined. Since most people with early stage lung cancer don’t suspect a thing, until now the disease has been diagnosed almost exclusively in its late stages.

Screening, unfortunately, is better at finding slow-growing  cancers than at finding aggressive and more lethal cancers. In a recent post in Scientific American,  Barry Kramer, MD, MPH said “we’re ‘curing’ people who didn’t need curing in the first place.” Kramer is Director of the Division of Cancer Prevention at the National Cancer Institute (NCI).

Thus the value of the test is still controversial to policy makers who must consider the health of whole populations. At a recent meeting of the California Technology Assessment Forum (CTAF), Aberle cited a “back-of-the-napkin” estimate published last year in Cancer Letter that shows the cost per life year gained at $38,000. Advocates at the Lung Cancer Alliance, using different data, calculate the cost at under $19,000.

In order to avert one cancer, an estimated 256 smokers would have to be screened, according to Peter Bach, MD, speaking at the CTAF meeting.  For people at low risk the number is 35,000. Bach is an outcomes research scientist at Memorial Sloan-Kettering Cancer Center and was first author of a meta-analysis of data about CT scanning for lung cancer published in August in JAMA.

With budgets already strained, the policy decisions about coverage for CT lung cancer screening will be complicated. Lung cancer is stigmatized, in part because much of lung cancer is preventable by avoiding cigarette smoking and nicotine addiction. In an attempt to counter that stigma the Lung Cancer Alliance devotes considerable energy to its public information campaign "No One Deserves To Die" (pictured here). 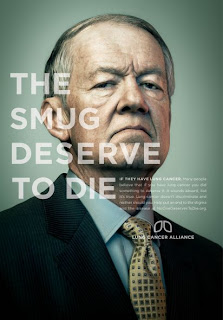 UCSF Radiology Professor Rebecca Smith-Bindman examined the NLST data and is an author on the 2012 meta-analysis.  In an email, she told me the decision about whether or not CT lung cancer screening should be a covered expense is a discussion that “needs to weigh the benefits and costs and competing demands...If the goal was to reduce lung cancer deaths, probably investing in smoking cessation would be much more effective.”

Aberle believes both approaches are necessary. “We will have a hugely missed opportunity if screening is not ‘tied at the waist’ with smoking cessation,” she said. “That’s a powerful combination.”

*note* a version of this article previously appeared at KQED.org
Email ThisBlogThis!Share to TwitterShare to FacebookShare to Pinterest