Skin in the game

Hooray for Obamacare, which will allow me to purchase health insurance (albeit at a high price) anywhere in the country. And hooray for my new job – it has traditional benefits. Call me paranoid, but I’ve waited to have those protections in place before sharing my patient story. 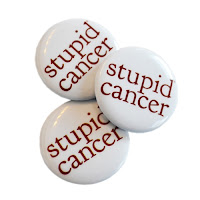 Cancer changed my life, but it doesn’t define it -- please don’t call me a survivor. What I am is eight and a half years post-breast cancer with no evidence of disease.  My prognosis is good. I feel healthy and my care providers seem to agree I’m in good shape.

Under a pseudonym on a breast cancer patient bulletin board I’ve listed my status this way:

-- but that’s not even the whole story. Allow me to translate the medicalese…

Step one: ductal carcinoma in situ (DCIS)
It started when, after consulting my primary care provider, I chose to have a “baseline” screening mammogram shortly after age 40. Dense breasts, no unusual radiologic findings. Ho-hum.  However, when I returned for the next set of pictures a year or two later the story changed. At age 43 my mammogram showed calcifications in a “suspicious” pattern within the milk duct of my right breast. After a thorough discussion with a surgeon I elected to have that clump of mutated cells treated with lumpectomy and radiation.

Did I dodge a bullet?
Not exactly.  Screenings became more vigilant – twice yearly. And three years later, a similar issue appeared in the other breast.  I told the radiologist we were going to wait three months and image ‘em again.  But the second set of pictures was worse.

After I saw those mammogram films I went home, sat in bed and ate from a tube of raw cookie dough. I felt truly sorry for myself.

What did we do for DCIS 2?
Treatment was substantially the same, and I won’t belabor the clinical details except to note that a small amount of invasive cancer was observed and removed during the lumpectomy. That necessitated a follow-up surgery to check my lymph nodes. Fortunately, none of the four nodes checked had cancerous cells.

All my traditional, western treatment has been at a major academic medical center and my providers are at the top of their fields. I had a decision support volunteer assigned from the beginning. I saw a genetic counselor (I am Ashkenazi with a family history of cancer), a psychologist and for a while, a psychiatrist in addition to a surgeon, oncologist and two radiation oncologists. A lymphatic-drainage bodyworker was miraculously able to reduce my radiation-induced edema; a physical therapist helped ward off lymphedema. Acupuncture and nutrition support also helped me heal.

A lot of credit for my healthy outcome goes to my life partner, who remained clear-headed as the medical data rolled over us in huge waves. She rapidly became my patient advocate, and she has consistently had my back in every way – even when others showed signs of strain. (“Why doesn’t she just have them cut off?" an extended family member was heard to ask about my seemingly treacherous breasts.)

Life after
After diagnosis I thought I knew what to expect -- but I didn’t. What I like to call my “mild case of cancer” has had serious consequences. My attempts to reduce my risk of recurrence created a chain of unforseen problems, including additional surgery.

For colleagues who have felt my “coming out” was long overdue, thank you for your respectful patience. I’ve been passionate about patient advocacy for many years. Even without publicly disclosing personal health information I’ve been active and vocal (see: this blog) and I’ve got plenty of book learning. But why deny it?  I’ve got skin in the game.

My experience informs my point of view, and that will likely be evident in posts from now on.
Email ThisBlogThis!Share to TwitterShare to FacebookShare to Pinterest

Appreciate your perspective on all of this, Eve. Best wishes, Elaine