The coach put me in!

I wanted to be in the TARGIT trial. I wanted it a LOT.  I had already been treated with lumpectomy and whole breast radiation for DCIS three years prior. Now, with a small lesion in my other breast, I knew what lay ahead. Day in, day out visits to the radiation oncology chamber for invisible treatment that would torture my skin and leave me exhausted. 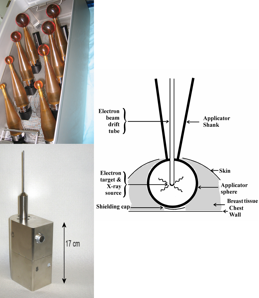 The TARGIT trial was testing Intra-operative radiation treatment (IORT) – a logical development that offered hope for fewer side effects. Immediately after surgical resection the patient receives a targeted dose of radiation delivered by an entirely different delivery system. It looks kind of like a steampunk ice cream cone. Providers use a plastic-draped robot to guide the bulb into place without themselves getting exposed to radiation.

The trial was due to open for enrollment at my hospital within days of my treatment decision. “Stick that thing into my tumor bed, please!” I thought.  I wanted badly to avoid a second experience with external beam radiation.

Don’t try this at home
Eventually I was granted off-trial access. But I did not get to skip more than the final three days of the traditional radiation protocol. My IORT exposure was considered legitimate substitution only for the “boost” dose, so edema and fatigue plagued me again for a few weeks.

Today I stumbled across a point/counterpoint article in ASCO Connection. Hurrah! IORT is validated! At least, some physicians believe it is. In the context of cost/benefit tradeoffs, shared decision making and real-world numbers, IORT has shown its value.  It may be most helpful to women who live in rural areas and others for whom it’s problematic to travel daily for six weeks of treatment.


As I read the article I feel a twinge of pride. I was patient #2!  Even though I was not on the trial, by volunteering I helped my physicians learn to use the IORT sterile robot safely and accurately. It’s a good feeling.
Email ThisBlogThis!Share to TwitterShare to FacebookShare to Pinterest